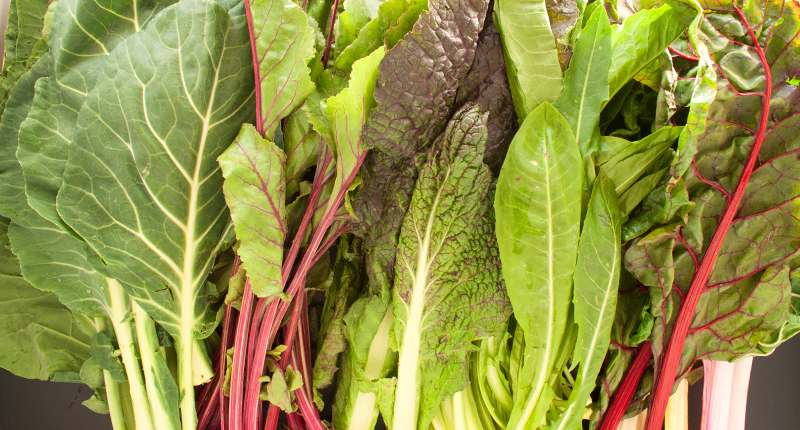 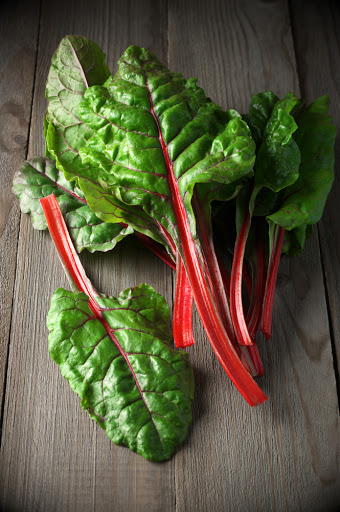 As much as marketers try to tell you, there is no silver bullet fruit or vegetable that has all of the nutrients you need. If you want the get most of your nutrients from your food, the key is variety. This is a great opportunity to have fun with your food and try as many different organic or no-spray vegetables you can get your hands on.

Leafy green vegetables are a great addition to your diet to get some of these nutrients. Kale, in particular, is having its moment and has become pretty ubiquitous on people’s plates over the past few years. The popularity of kale has exploded recently, from smoothies to shirts to a kale salad in a lot more restaurants than before.

If you’ve got some kale fatigue, want to try something new, or want to get the most nutrients from real food? There are a lot more nutrient dense leafy greens you can try. 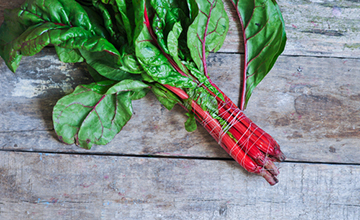 With bright green leaves and a colorful, edible stalk, Swiss chard is a great leafy green to add some variety on your plate. Swiss chard stalks come in white, yellow, pink, and deep red. Often times, farmers will bunch those colors together and sell it as rainbow chard. You can also buy a bunch of one color.

If you start buying Swiss chard regularly, mix up the colors you buy so you get a variety of phytonutrients, the things that give the chard their vibrant colors. The stalks are edible and can be added to your saute pan with onions and garlic. Swiss chard isn’t as strong tasting as kale.

Nutrition: Swiss chard is a great source of a lot of nutrients. It’s a beyond amazing source of vitamin A and K, which are good for eye health and bone health. It’s also a good source of vitamin C, magnesium, potassium, iron, and fiber.

In Season: Swiss chard is in season all year, with its peak season being in late summer. If they become harder to find in grocery store, head to your local farmer’s market; you’ll most likely have better luck there.

How to Use Them: They’re a great swap for kale in any meal. The leaves can be enjoyed raw or cooked. The stalks are better cooked. The leaves aren’t as tough as kale, so they’ll wilt when cooked faster than kale, but not as fast as spinach.

Most associated with classic Southern cuisine, collard greens are broad-leaved greens that are heartier than kale. Like kale, discard the stalks. 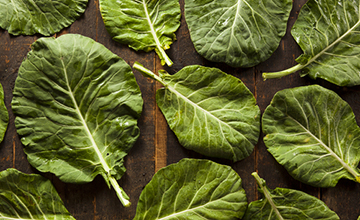 In Season: Collards come in season at least twice a year, in the summer and in the fall/winter.

How to Use Them: The leaves are much thicker than kale, which means they can stand up to some cooking. They’re great for adding to a long-simmering stew with some vegetables and rice. You can also saute them like most greens, but they just won’t be as soft as most greens get when sauteed. You can also lightly steam the leaves and use them as a wrap or tortilla replacement. Collard greens can also be baked into a “chip” like kale chips.

Don’t just toss the beet greens away the next time you buy a bunch of beets. Beet greens are edible, tasty, and packed with nutrients. Beets come in variety of colors, from white, yellow, orange, pink, and the classic deep red. The colors of the beetroot extend to the stalk, much like Swiss chard. If you up your beetroot and green consumption, eat as many different colors as you can find. Beet greens don’t taste too much like the beet root. 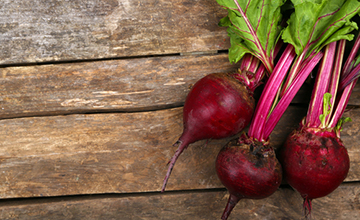 Nutrition: Beet greens, like a lot of of other greens in this article, are powerhouses in the vitamin A and K department, with several days of your daily value. Beet greens are also a good source of vitamin C, potassium, manganese, magnesium, riboflavin (a B vitamin), copper, and fiber. With benefits likes these, you’ll think twice before you toss your beet greens to roast some beet roots.

In Season: Beets come into season in the spring and fall, but are available year-round in grocery stores and certain parts of the country. Colored varieties (besides the red) are easier to find in farmers markets, and their offerings could depend on the time of year.

How to Use Them: Separate the stalks from the leaves and use the leaves like you would kale: in salads, sauteed, in smoothies, soups, side dishes. Treat the stalks like you would the Swiss chard stalks and add them with your aromatics in sauteing, in soups, incorporated in your side dish or in a great catch-all dish like a casserole or quiche.

Spinach is like an old friend in the leafy green world. It’s pretty normal to start upgrading your greens from lettuce to spinach to kale. Spinach is still a great green to have in your diet. Spinach also has a mild flavor that doesn’t overpower in smoothies or dishes.

Nutrition: Spinach has over several days of your daily value of vitamin K and is a good source of vitamin A, C, iron, and folate. If you enjoy your spinach raw or blitzed up in a smoothie, you’re also hydrating yourself, since spinach is almost a third water.

In Season: Spinach is available all year round in bunches or prewashed.

How to Use Them: They’re a perfect swap for kale in any dish or smoothie. If you’re cooking spinach, you will need more spinach than you would kale in a recipe because spinach wilts so much. Spinach is an easier salad green option than kale since spinach isn’t as toothy. 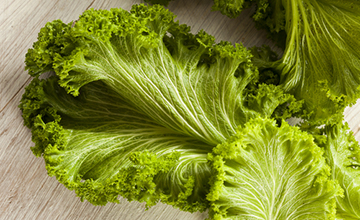 The mustard plant can be used for more than just the seeds to make mustard. Mustard greens look like a cross between kale and Swiss chard leaves, minus the colorful stalk. They come in a few color varieties, meaning you can get a variety of phytonutrients from eating them. They have a peppery taste similar to arugula.

In Season: Mustard greens are available year round, with a peak season starting the fall and ending in the spring.

How to Use Them: Younger varieties would work great raw as salad greens. If you’re not the biggest fan of peppery greens, mix it with a more neutral tasting green like spinach. Mustard greens would be good sauteed in side dishes, soups, or hearty meats with strong flavors. 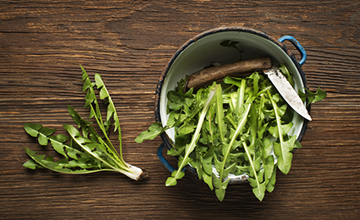 Though most of think of dandelions just as weeds we picked as kids, the dandelion greens are edible and pack in a lot of nutritional benefits. You don’t have to forage for them, some grocery stores and farmers markets carry them for you to try and incorporate in your diet. They have a slightly bitter taste. If you buy younger/smaller dandelion greens, you can probably avoid too much bitterness.

Nutrition: Similar to the other greens on this list, dandelion greens are an amazing source of vitamin A and K, with well over your daily value in one cooked cup. They’re also a good source of vitamin C, calcium, fiber, and vitamin E. In Eastern and alternative medicine, dandelion is used for liver and gallbladder support.

In Season: Dandelion greens are in season from January to late spring. If you can’t find them in your grocery store, head to your local farmers market.

How to Use Them: They can be enjoyed raw or cooked and be used in a pretty even substitute to kale or other greens. Dandelion greens have a similar consistency to spinach, but don’t wilt as fast. They’ve got a bitter taste that lessens a little when cooking. You can add healthy fats, salt and acid to balance the astringency out. Younger dandelion greens are slightly less bitter and would be great raw as a salad.

Though it’s not immediately thought of as a leafy green, cabbage a great edition to your leafy green rotation, whether it’s raw, pickled, or cooked. 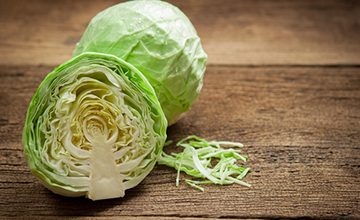 Nutrition: Cabbage is very high in vitamin C and K. When you pickle cabbage into sauerkraut or kimchee, you’re also adding digestive benefits to your cabbage as well. Fermentation partially breaks down the food, making it easier on your digestive system to handle and keeps that system balanced with healthy bacteria.

Fermenting cabbage is also believed to increase the amount of glucosinolates in cabbage, which can fight off disease.

In Season: Available at grocery stores all year round, cabbage is in its peak season late in fall and through the winter.

How to Use Them: Cabbage can be shredded raw and used as a slaw or pickled into sauerkraut. You can also roast cabbage as a side dish and enjoy it as a wedge or cut it up and add it into a grain or other green salad. Like collard greens, cabbage also works as wrap or tortilla substitute. You can also use the leaf as a cup instead of lettuce.

The next time you meal plan or head out on your shopping trip, consider swapping kale out for one or two of these greens. The more you try, the more you’ll get a feel for which ones you enjoy the best. As you get more familiar with which ones you like, you can even start adding more than one green to your meals. Variety is the spice of life, so swap them out often to get the most nutrients you can.

Healthy Eating 101 returns with an easy way to preserve foods and cut down on food waste. 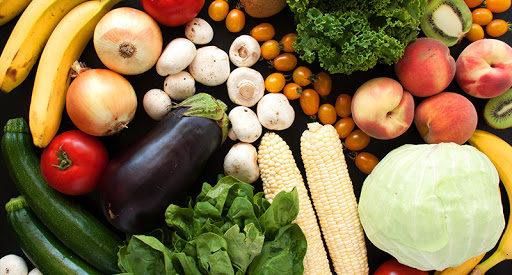 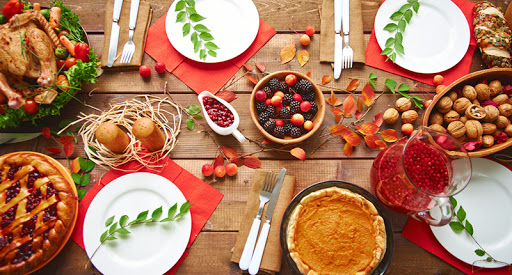 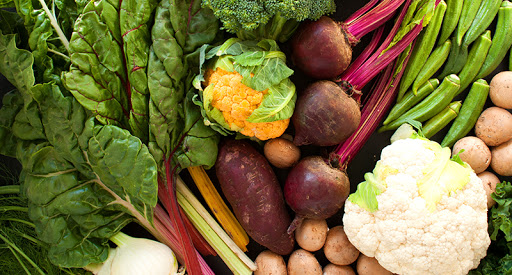 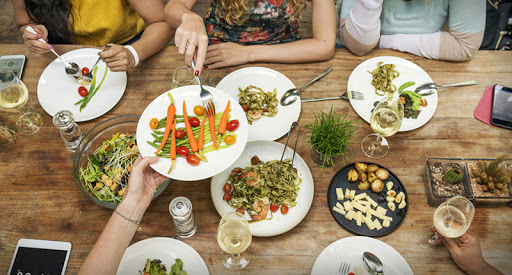 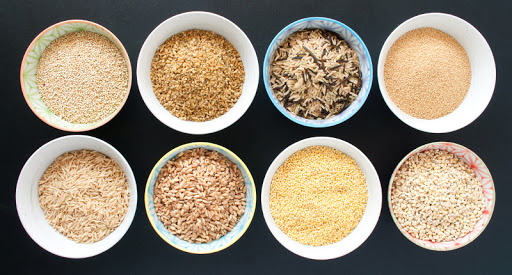 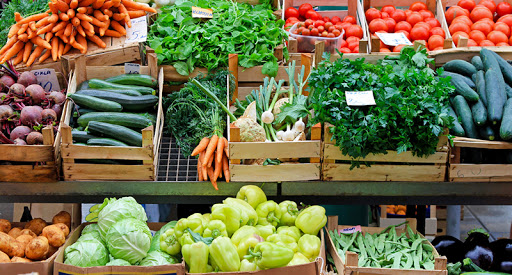